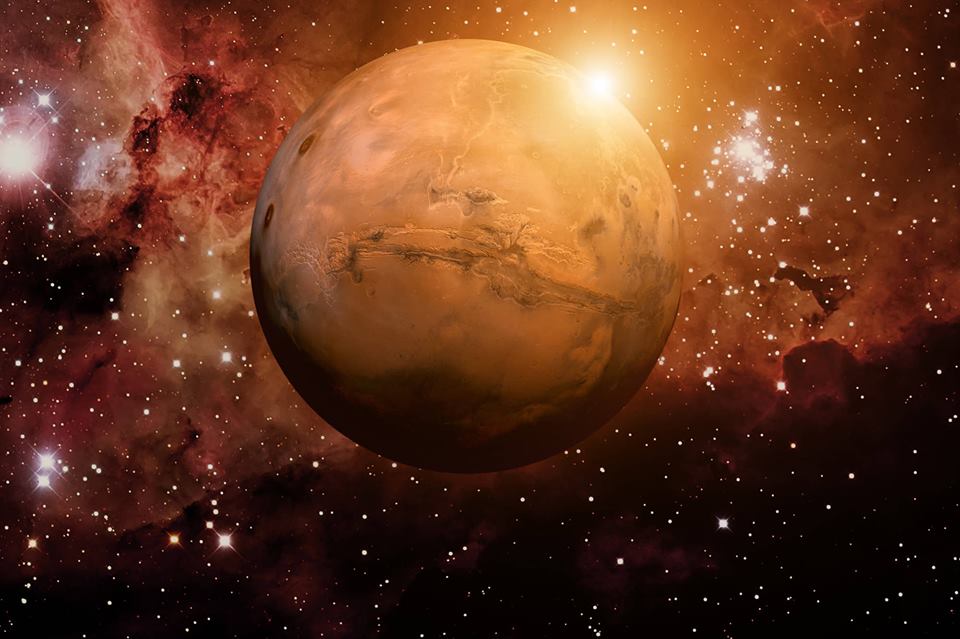 Mars is the fourth planet from the Sun and is the second smallest planet in the solar system. Mars is also often described as the “Red Planet” due to its reddish appearance. Mars is a terrestrial planet with a thin atmosphere composed primarily of carbon dioxide.

Olympus Mons, a shield volcano, is 21km high and 600km in diameter. Despite having formed over billions of years, evidence from volcanic lava flows is so recent many scientists believe it could still be active.

As of September 2014 there have been 40 missions to Mars, including orbiters, landers and rovers but not counting flybys. The most recent arrivals include the Mars Curiosity mission in 2012, the MAVEN mission, which arrived on September 22, 2014, followed by the Indian Space Research Organization’s MOM Mangalyaan orbiter, which arrived on September 24, 2014. The next missions to arrive will be the European Space Agency’s ExoMars mission, comprising an orbiter, lander, and a rover, followed by NASA’s InSight robotic lander mission, slated for launch in March 2016 and a planned arrival in September, 2016.

They can last for months and cover the entire planet. The seasons are extreme because its elliptical (oval-shaped) orbital path around the Sun is more elongated than most other planets in the solar system.

Scientists have found tiny traces of Martian atmosphere within meteorites violently ejected from Mars, then orbiting the solar system amongst galactic debris for millions of years, before crash landing on Earth. This allowed scientists to begin studying Mars prior to launching space missions.

For years Mars has been known to have water in the form of ice. The first signs of trickling water are dark stripes or stains on crater wall and cliffs seen in satellite images. Due to Mars’ atmosphere this water would have to be salty to prevent it from freezing or vaporising.

In the next 20-40 million years Mars’ largest moon Phobos will be torn apart by gravitational forces leading to the creation of a ring that could last up to 100 million years.